The IMO's initial strategy on the reduction of GHGs from ships sets out targets for both 2030 and 2050, setting the pace for shipping's decarbonisation agenda over the coming decades.

This article sets out the detail of the 2030 target, how it is measured, how it might be achieved and the debate around its level of ambition.

The initial strategy sets an aim for the industry "to reduce CO2 emissions per transport work, as an average across international shipping, by at least 40% by 2030, pursuing efforts towards 70% by 2050, compared to 2008."

This is an aim targeting carbon intensity, or the amount of carbon produced for every piece of freight moved around the world, rather than a cap on the industry's total emissions.

That means in practice it measures emissions per ship, and is not affected by the overall growth of the global fleet over the next decade.

The aim is to ease into decarbonising shipping with the first target, before moving on to the more ambitious aim of reducing the industry's total emissions in the run-up to 2050.

How To Measure It

A lack of firm data on which to base these targets was a major unresolved problem until the publication of the IMO’s fourth GHG study in August 2020.

Because carbon emissions ‘per transport work’ has no fixed definition, the report uses four different measures to estimate carbon intensity:

EEOI was the measure proposed by the IMO in 2009, and the other three measures come from proposals from individual IMO member states. Estimates for the measures are primarily based on AIS data, with operational draughts used to estimate the mass of cargo carried.

The four measures come out with significantly different interpretations of the change in carbon intensity from 2008 to 2018; EEOI shows a reduction of 29.4% and AER a cut of 21%, while DIST and TIME show gains of 14.7% and 9.2%, respectively.

The IMO, in the run-up to the 2023 review, will need to decide which of these measures to use as it firms up its strategy.

How To Reach It

It had originally been expected that short-term measures to cut shipping's carbon emissions might have been agreed already by now, but delays at the IMO for a variety of reasons have held back this item on the agenda.

The least controversial route to lowering carbon emissions is one that many shipping companies have already voluntarily pursued: fuel efficiency measures. Shipowners already have a strong incentive to reduce their fuel bills by finding ways of cutting consumption. 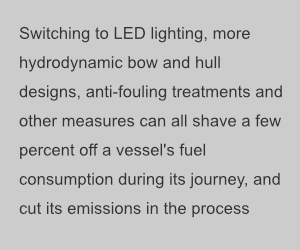 Switching to LED lighting, more hydrodynamic bow and hull designs, anti-fouling treatments and other measures can all shave a few percent off a vessel's fuel consumption during its journey, and cut its emissions in the process. Shipping companies are to a greater or lesser extent already attempting these modifications, and moves towards making them compulsory would  be unlikely to prove too controversial, if some funding were to be made available for the more cash-strapped firms.
But the biggest fuel-efficiency measure shipping could take on -- slow steaming -- would face much more opposition if it were made mandatory.

At times of especially high bunker prices or low freight rates, shipping companies are already in the habit of reducing their speed to a level that maximises fuel efficiency, if the money to be saved in lower bunker bills is less than the amount to be lost in the freight market by moving more slowly.

Some have suggested making this practice mandatory, and slowing ships even further, as a means of cutting GHG emissions. There have already been some disagreements at the IMO over whether restrictions on speed or engine power would be the better measure, as engine power limitations would take account of how fuel-efficient the vessel is.

Research from the International Council on Clean Transportation this year found that a 30% engine power limitation could cut emissions by 2-3%, while a 50% limitation could deliver 8-19% cuts. The limitations would need to be adjusted by engine type and size.

One argument put against limiting speed or engine power is that its effect would be felt in the freight market as the removal of a large amount of tonnage; the natural response from the market would be to build new ships to make up the shortfall, negating some of the emissions reduction.

Another argument is that vessels that have already taken other emissions-reduction measures to meet the 2030 target would not want to be covered by a blanket engine power limitation applied to all ships. 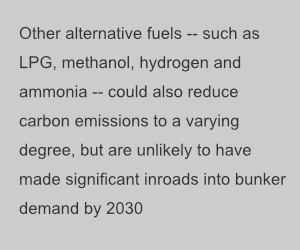 Beyond fuel efficiency measures, the other main area of emissions reduction strategy comes with investigating alternative energy sources for ships.

LNG is the alternative fuel with the biggest following at present. Natural gas advocates and environmentalists are divided on its impact on GHG emissions -- the greenhouse effect of the methane leaked during bunker operations is at the heart of that argument -- but there is agreement that burning natural gas rather than conventional bunkers produces much less carbon dioxide -- the specific gas to which the IMO 2030 target refers.

Biofuels could also be viewed as reducing net carbon emissions, if viewed on a life-cycle basis that takes into account the carbon dioxide removed by the plants from which they are produced, and these fuels are starting to take up a small share of global bunker demand.

Other alternative fuels -- such as LPG, methanol, hydrogen and ammonia -- could also reduce carbon emissions to a varying degree, but are unlikely to have made significant inroads into bunker demand by 2030.

Moving beyond alternative fuels, hybrid vessel designs that take on renewable energy for a portion of their demand could also help.

Shore power that allows vessels to take power from land-based sources while at port is already offered at a variety of locations; if this power comes from renewable generation capacity, it could be counted towards a reduction in fuel consumption and emissions.

Some companies involved in short-sea shipping have taken on batteries to provide some of their energy requirement; again, if renewable power is used to charge the batteries, it can count towards the climate targets.

Also, wind power in the form of Flettner rotors and similar systems is already counting towards the energy requirements of some ships, and solar power in a few more cases.

Is It Ambitious Enough?

The main debate around the 2030 target centers around whether the IMO set too low a bar; no mainstream voice in the shipping community doubts that it is achievable, but some have argued that it could have been much stricter.

The argument from environmentalists is that 2008 was chosen as a base year because fuel efficiency was particularly low at that time, thus making it easier to reduce carbon intensity from that year's level. This side of the argument will seek to use the IMO strategy review in 2023 to toughen the targets.

There is some evidence to suggest that the 2030 target was relatively easy to reach; already this year a series of companies including Maersk and Hapag-Lloyd have announced that they have achieved it a decade early. But these announcements have tended to come from the wealthier end of the shipping industry, and shipowners with less cash at hand and older ships are likely to have fared less well.